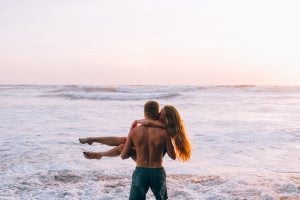 So, she’s gone, and you want her back. You’re a miserable mess and ready to make amends and start things over.

You see where you went wrong, know what you will do better next time, and you’re willing to do anything to get her back in your arms.

But what can you do?

Movies and TV shows make it seem so easy. Grab yourself a bundle of flowers, rent a white limo with a decent speaker system, climb a fire escape, and she’ll be yours forever (Pretty Woman). Or maybe one bundle of flowers isn’t enough, and you prefer to buy a whole field of flowers to win her back (Big Fish).

The truth is, winning back a woman’s heart is never going to be easy, and rarely will it involve some grand romantic gesture that rom-coms and victorian-era novels teach us should be commonplace.

Today, we will discuss what to avoid when trying to win her back and what generally works. The gestures that will win her back are more like maturing, becoming a better lover, and getting some self-confidence–boring things like that.

If you were hoping for a how-to guide to make her love you again–a top ten list of songs to play outside her window or some tips on how to write a good wedding-crasher speech–I’m sorry to disappoint you.

If you stick around until the end, however, we’ll get a bit into when a romantic gesture may not be such a bad idea.

Romantic gestures: what not to do

In writing, there’s a general rule that it’s best to address the positive aspects of something first, then present the negatives second as drawbacks or things to consider.

Keep that in mind as you read this article and note how the negatives are intentionally put at the beginning. The truth is, situations in which a single romantic gesture will change your ex’s mind are extremely rare.

I say this not to discourage you but because throughout my ten-plus years as a men’s coach, I have seen more men hurt than helped by such bold romantic acts.

If they insist and begin to set their feet, I will remind them of the huge risks and consequences.

I won’t get in their way if they continue for two reasons. If I stop them now, they’ll probably just do it later. And hey, sometimes people land backflips.

Here are four things to avoid when considering romantic gestures to win her back.

To arouse jealousy or a sense of novel curiosity, many men will act as if their life has taken some sort of drastic turn. This is what I call the “new you” approach.

Some of the most common examples of this are:

While these may seem like great ways to stir her heart in your head, they won’t work.

If your ex has any head on her shoulders, she’ll see right through these childish tactics and think all the worse of you.

2. Don’t try to logic your way into her heart

While it would be fantastic if everything was as simple and clear-cut as addition and subtraction, that’s not the way of the world, especially regarding relationships.

Logic rarely has a place in matters of the heart. Trying to convince your ex that her reasons for leaving you are illogical will never work.

In your head, logical arguments seem like a great idea. In practice, not so much. Most women hate when men try to explain everything that could make them a great couple.

To most people, trying to logic your way back into a relationship comes off more as whining and begging than it does a romantic gesture.

3. Don’t throw yourself at her feet

Begging or pleading for her to return to you is rarely going to win her heart.

Even if you screw up big time, a humble apology and request for forgiveness should rarely put you on your knees or at the mercy of her judgment.

Women want a man who is confident in himself, aware of his flaws and able to admit when he screws up, but mature enough to recognize his value. Throwing yourself at her feet and begging for her to take you back does nothing more than prove to her that your sense of self-worth depends on her validation.

There’s no denying that some circumstances merit passionate, heartfelt apologies; these should just come across as, “I’m sorry, I know I’ve done you wrong,” rather than, “I can’t be alone, so please take me back.”

If you are determined to sway your ex-girlfriend with a grand romantic gesture, it should be the finale of a long build-up rather than a sudden event.

Too many men think that if their gesture is romantic enough, she’ll somehow forget why the separation happened in the first place.

To win her heart again, you will have to make her feel respect and attraction for you again, not surprise her with one act of romantic grandeur.

To women, grand romantic gestures without a noticeable change in the man she broke up with do nothing more than trivialize the reasons for the breakup.

Romantic gestures: what to do

Here are four tips if you’ve read this far and you’re still convinced that a grand gesture is a way to her heart.

You have to work on yourself to make her want you again and give your romantic gesture some significance.

If you take one thing from this article, let it be this: grand romantic gestures only work when the man behind them has changed since the breakup.

Do some lengthy self-reflection, speak to a mentor, read some self-improvement books, and do whatever you need to do to become the changed man she will take back.

If, and only if, you can prove to your ex that the man she left is not the same man that she is taking back, you will have hope of winning her heart again.

To do this, you must have a purpose–somewhere you’re going. You must become a self-sufficient, grounded man whose happiness and fulfillment are dependent on nobody but himself.

You want your ex to feel like you have chosen her as someone who will help you in your purpose, not like you are relying upon her for your purpose.

2. Give her time and space

Grand romantic gestures should rarely come immediately in the wake of a breakup.

A gesture within the month or even the week after a breakup usually comes across as desperate, immature, and needy (not all the time, but usually).

To show your ex-girlfriend that you truly respect and love her, you should usually allow a healthy length of time after the breakup before introducing the prospect of getting back together.

This conveys that you respect her decision to break up and, after thinking it through objectively and letting some emotions fade, have concluded that you want her back.

This will be painful for you, but it’s always worth it.

Before planning a dramatic display of your love for her, you should ask the important questions such as:

If she refuses you, move on.

Part of what it means to be a grounded man is knowing that your importance in the world isn’t dependent on the approval of another.

If you get turned down, don’t be heartbroken–it’s probably for the better. Shake it off and get back to your purpose. Learn how to move on. Don’t let it ruin you.

Sometimes, you may be surprised. I’ve seen guys get turned away and then called back because of the confidence with which they left.

Women want to see men that don’t need them but want them. Women want to be chosen, not relied upon for validation or approval.

So, you know a bit about what to do and what not to do. What about when? When should you use romantic gestures to win her back?

Here are four situations when grand gestures tend to work:

When the situation is right, and the emotions are already there, a display of commitment and love can overwhelm a woman and be the perfect introduction to the “new you.”

As long as you understand that the key to reigniting passion in your relationship lies in your ability to work on yourself and not on how many roses you can buy or how loud you sing, you can have wonderful success with such a gesture.

Things only go south when you manipulate her, try to explain your way back into love or beg at her feet for her to return to you.

She needs to see that you have something new to offer her to win her back.

Don’t lose heart if you still feel hopeless or need further advice. Here at Knowledge for Men, we have a dozen of the most highly-trained men’s coaches on the planet at our disposal. These men are pros at turning hopeless situations into thriving romances. It’s time to start directing your existence rather than letting life whip you around like a leaf in the wind.