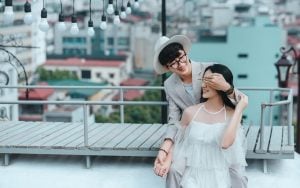 If you’re like most men out there, and you struggle to know when someone likes you; don’t worry, you’re not alone.

It’s super common for men to find it hard to know when a girl is interested, and it’s not your fault either, this is mainly down to fundamental differences in how the sexes communicate:

“In general, women tend to want to communicate their needs and desires more indirectly, whereas men tend to be more direct and straightforward in communicating what they want”- Anita Boyd, Relationship Expert

We can all agree that girls are definitely less obvious when they are attracted to men.

But if you want to have the power and knowledge that allows you to know, for certain, when the woman that you want also likes you, this article can help you figure out if “she’s really feeling your vibe”; both in-person and virtually.

The modern dating scene is radically altered and has more obstacles

Mating and attraction are literally as old as the “birds and the bees” and men have forever been trying to figure out if the woman that they like; also likes them back.

However, it can definitely be said that men in this generation have had a few more obstacles to contend with than previous ones. Almost 50% of all dating is now done online, with 53.3 million Americans due to date online in 2024.

There have definitely been a few more obstacles on the modern dating scene for guys nowadays; than there probably ever have been before.

If you are searching for your perfect woman and finding it hard to navigate this complex, modern, dating scene, we’re here to help. Join our expert coaching program where we’ve been helping men for over a decade to become the best versions of themselves. If you want to increase your confidence as a man, reclaim your masculine power and be successful with the women that you want, this is the program for you.

10 Sure-Fire Signs She Likes You

It’s no secret that it can be hard to figure out if someone likes you in real life, never mind online, especially as you don’t have any obvious clues from body language to help you out.

But when you know what to look for in the virtual dating world – it’s actually quite easy to tell when someone likes you.

1. She Messages You first

Let’s start with an obvious one, if a woman contacts you first, this is a pretty good indicator that she likes you.

It’s important to remember that it’s going to take some courage for her to do this, especially when you consider that women have been socialized from a young age “not to make the first move”.

But the truth is that people naturally want to speak to other people that they like and to who they are attracted. So if a woman contacts you first; it’s a pretty good clue that she has some “feels”.

“When women make the first move, this is usually their “first choice person”- Jon Birger

So when a woman is making her first move by starting a conversation, you can be pretty reassured that she is interested in you.

Isn’t it so frustrating when you message someone and it takes ages for them to reply, or you just get one-word answers? Well, honestly, that type of communication is indicative of someone who probably is not interested.

However, when a woman likes you she’s going to want to talk to you, and she’s going to enjoy talking to you; a lot. Women literally “talk their emotions”.

Scientific studies show that women are more emotionally expressive than men and also, that they express their emotions more verbally. So if she likes you, she’s going to be expressing her attraction toward you through conversation.

Women love to talk; and also talk to those they love.

So if the person that you like is replying to your messages with detailed answers, fast and frequently, and willingly making efforts to “extend” the conversation; it’s a sign that she’s excited to hear from you, and that she wants something more. It shows that she wants to get to know you and is trying to foster a connection beyond just the surface level of “friendly chat”.

Remember, life can get busy and we all have things in the day that can pre-occupy our time, so if you’re not getting instant “ping” response’s back right away; don’t worry, she may just be out there busy with her life.

Researchers discovered that when a woman is attracted to a man, she will remember details about him and pay more attention to the information that he provides about himself.

So, for example, she’ll remember the date of your birthday or a short story that you told her from your childhood.

If the woman that you’re interested in is able to repeat small details about your life back to you; it’s a sign that she likes you.

4. She Compliments You Often

The University of Kanas identified “giving compliments” as a way to communicate romantic attraction.

She might remark on how lovely your smile is, how much she likes your suit, or how funny you are. These are all subtle signs she might be into you.

If a girl is using flirty language or pick-up lines and steering the conversation towards sharing more about her and her life, this is a pretty good sign that she’s “feeling the vibe” and is interested in you.

This might also be her attempt to establish a “sexual rapport” with you, which isn’t always even a conscious thing with women.

Science shows that women often use subtle, flirtatious, communication to initiate male advances and they often do this unconsciously when they are attracted to you.

Furthermore, if you’re getting flirty and sexy emojis, you can pretty much take the hint that she fancies you. Scientific studies have confirmed the use of certain emojis to convey romantic and sexual attraction in online dating.

It’s also helpful to be aware of what her usual communication style is with others, as you can use this as a baseline to gauge her intentions.

For example, if you can see that she isn’t sending out hearts, kisses, and the peach emoji in general chat with others; this is a big sign that she likes you.

Research shows that when someone is attracted to you they will subconsciously engage in a lot of eye contact; one reason for this is that eye contact triggers the release of Oxytocin.

This is a chemical messenger in the brain that plays an important role in pair bonding, attraction and romantic connection. In fact, oxytocin is actually nicknamed “the love hormone”.

So if a woman keeps making direct eye contact, and repeatedly looking at you; she likes you.

Another big clue that someone likes you is their pupil size. Whenever we are romantically attracted to someone our brains release dopamine and oxytocin, both of which cause the pupils to dilate and widen. A women’s pupils dilate the widest when she is looking at the man she is attracted to; especially during her most fertile time.

7. She Tilts her Head a lot when Talking to You

According to a study on women’s body language; researchers found that, when a woman is attracted to you, she will often tilt her head during conversations.

This is a sign that she is very interested in you and is absorbing what you’re saying.

The study also showed that if the man changed the topic and the women’s head remained tilted; Bingo. She likes you.

8. She Mirrors Your Behavior

If you notice that your date or person that you like seems to be sitting the same way as you, using similar hand gestures and basically copying your movements; this is called “mirroring” and is definitely a sign that someone likes you.

Mirroring is a mainly unconscious behavior so it’s a great way to know that your date is attracted to you without them actually saying so.

A study conducted at the University of Missouri found that when females are attracted to a male; they will engage in several “self-preening” behaviors.

For example, if you notice that the girl you’re with keeps fixing her hair, applying lipstick, and checking herself in the mirror; you can be pretty sure that she likes you.

Especially as these behaviors have been scientifically proven to indicate female attraction.

10. She Finds an Excuse to Touch You

According to author and Doctor, Gary Chapman, physical touch is actually one of the “The 5 Love Languages” – different ways in which humans express love and attraction.

In his book, Dr Chapman describes how humans use physical touch in dating and relationships and how this can be a sign of attraction and love.

For example, if you notice that your date is finding excuses to touch you, even in a light, casual way, such as, leaning on your shoulder to look at something, or brushing some fluff off your jacket; there’s a good chance that we are dealing with a case of – She. Likes. You.

Researchers who study the “Science of Attraction” refer to a man’s ability to gage whether his potential mate is interested or not as his “de-coding abilities”.

So hopefully, with all the scientifically proven methods shared within this article we will have significantly increased your individual “de-coding abilities” and you’ll be out there picking up all the right signals; and the right women.

If dating and romantic relationships are areas you feel you need some support in, we have an amazing coaching program where we’ve been helping men for over a decade to literally transform their lives.

If you’re ready to reclaim your masculine power and become the best version of yourself while increasing your confidence as a man and start getting the women that you really want, watch our client orientation to get started.