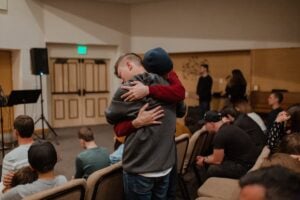 After a relationship, you’re plastered with feelings and emotions you probably don’t want to deal with.

You might feel angry, depressed, frustrated, broken, or alone.

Breakups are hard – I get it. Losing a loved one isn’t exactly my idea of a good time, either.

But that being said, a breakup is a crossroads for you as a man. You have two choices: fade and allow your breakup to consume your life, or find a way to rebuild yourself and come back stronger than ever.

If you’re anything like me, the latter probably sounds better than the former.

One of the best ways you can rebuild yourself after a breakup is by joining a breakup support group – a group of people struggling with the same things as you are.

A “tribe,” if you will, people who want the same thing you want. A team.

This is how a breakup support group can help you heal and recover from even the worst possible breakups.

What we’re doing here is called “self-improvement,” but that doesn’t mean you have to do it all yourself.

The journey is probably better, and you have a better chance of recovery when you dare to work with others to better yourself.

Finding ways to work with others – like in a breakup support group – can help you become the man you’ve always wanted to be. When you cannot stand alone, find others to help build you up.

Before you know it, you’ll all be standing on your own, side-by-side with the other group members.

That’s what a support group is all about.

Here are 8 of the most important ways a breakup support group can help you after a devastating breakup.

1. In a Support Group, You’ll Realize That You Aren’t Alone

If I tell you, “you’re not alone!”, you’ll probably roll your eyes at me.

“I am alone,” you’ll say, “my girlfriend is gone, and I’m sitting here reading an article – alone.”

That’s the thing. You are alone now, but you don’t have to be in the future. Think about the support groups as an investment.

This holds them back from being everything that they can be.

When you join a breakup support group, you’re instantly connected to a world of men experiencing the same thing you are. You’re connected with like-minded individuals, but most of all, the pain and loneliness you feel after losing a loved one will ease – at least a little bit.

This will be huge for kickstarting the healing process.

After a bad breakup, your health is in a very fragile place.

Even if there is no physical abuse in the relationship, breakups can be traumatic, and people react with the exact coping mechanisms of people recovering from traumatic experiences.

Drinking, drugs, social withdrawal, emotional manipulation, laziness, or even overworking – the list of bad habits you’ll adopt from struggling to handle your breakup goes on and on. You must do whatever you can to avoid this trap.

When you join a breakup support group, one of the first and most important lessons you’ll learn is how to stop these unhealthy coping mechanisms and replace them with healthier, more sustainable ones.

Put bluntly, you’ll learn how to handle yourself better when going through something as challenging as a devastating breakup.

In addition to learning how to handle your breakup better, the best part is that through a breakup support group, you will be forced to stick to your plan for improving yourself.

Because that’s the other big issue: men plan how they will get their lives on track after breakups, but they lack the infrastructure to follow through with these plans.

To put it bluntly, they half-ass them.

It’s good to have a plan for how you will get through a breakup, but that’s not all there is to it.

You need to hold yourself accountable, and the beauty of a breakup support group is that it removes the possibility of slipping up. For men who are serious about their progress, this is essential.

Think about it like having a spotter in the gym:

When you’re lifting weights by yourself, you safely cannot push yourself as hard as you would if you were lifting with a spotter – someone who can watch you and ensure you don’t fall under the pressure of the heavyweight.

Now, imagine that you have an entire group of spotters, only instead of helping you hit that new max in the weight room, they’re helping you get through your breakup and improve your mental health.

It’s like having a team of people who want you to improve. Your only requirement is to help them when they need support too. You have to be a team player, but we will discuss that momentarily.

The truth is this: people on their own are not as strong as they are when they have other people around them.

Male loneliness is a real epidemic, and breakup/divorce support groups can help change that.

4. You’ll Learn How to Build Other People Up When They’re Struggling

Friendship today isn’t the same as it used to be.

People today are flaky, have short attention spans, and are always looking for “something better”.

I don’t like that, and I don’t think you do either. That’s why the breakup support group is so powerful: it removes this flaky element and forces people to put their best foot forward.

This is what makes a therapy group so powerful – the community.

Not only are you going to improve your mental health, but you’re going to learn the essential skills that will allow you to become a better and more supportive person yourself.

When you enter a supportive environment, you’re forced to be supportive to connect. Doing this builds everyone up!

5. You’ll Learn the Stories of Other Men Who Have Had Similar Experiences

It’s one thing to know that you’re not all alone, but it’s much deeper to connect with people who have experienced similar things to you and hear their stories.

Interacting with your group members will teach you the importance of talking about your feelings and listening to others talk about their feelings. You’ll become a better future partner for whoever you date next.

When you join a support group, one important aspect to consider is that everyone will be at different stages of their healing process. You might start off as someone with the longest road to go, but before you know it someone who’s struggling even more might come along.

When this happens, you can lend a helping hand to them the way that the more experienced group members will when you join them initially.

This is the power and benefit of a breakup support group: everyone lifts each other up, and you all reach your goal of moving on and finding peace.

6. In a Breakup Support Group, Your Beliefs About Relationships Will Be Challenged

You don’t know everything about relationships.

Unfortunately, humans are very complicated. Most people die without ever really knowing themselves, much less another person. We try our best to have good relationships and learn as much as possible, but getting other perspectives about relationships is hard.

This is perhaps the best and most uncomfortable part of being a part of a breakup support group.

During conversations with other support group members, your established beliefs about relationships will inevitably be challenged. It’s going to be uncomfortable to have to deal with this, but doing so will give you a sense of enlightenment when you reach the other side.

It’s beautiful to have your world shaken up – you come out on the other side stronger, more open to experience, and perhaps even a bit happier.

Embrace how much you don’t know and lean into the process of having your beliefs challenged.

7. You Won’t Be Isolated During the Hardest Part of Your Breakup

If you join a breakup support group in the early days after your breakup, you’ll gain something essential to a speedy recovery.

I often see in breakup support groups that men come to them after struggling to move on by themselves for a long time. They’re “stuck”, and the support group does a great job of helping them get “unstuck”.

This is what we do in group therapy. We help you create a community when struggling to build a new life after a breakup.

However, if you join the support group immediately after your breakup, you can completely bypass the weeks and months of suffering and struggling to move on on your own.

Post-breakup rumination is a real problem, especially for men raised in a culture that taught them that they aren’t allowed to talk about how they feel when they’re struggling.

Joining a support group helps free you from the most difficult part of a breakup – the rumination that comes from isolation.

8. You’ll Learn That Being Single Isn’t So Bad

Contrary to the societal perception, most single people, in general, are pretty happy.

That being said, most single people who are unhappy are usually male.

Don’t overthink it. Look at the world around you.

The main reason that so many men are unhappy with being single is that they feel that they are expected to be dating tons of women constantly. You think you’re supposed to have girls around you all the time to be happy as a man.

The irony is, the more you become at peace with your singlehood, the more confident you will become in the dating game. You’ll start to take control of your romantic relationships, and you’ll choose the women that are coming into your life.

I promise you, this is one of the most empowering feelings as a man – the power to choose your own destiny romantically.

Your group members will give you that supportive environment that helps you realize how good life is, single or not.

It’s crucial to have social connections outside of romantic partners.

The breakup support group will teach you the self-confi

After a breakup, rebuilding your life can seem impossible, even for the strongest of men.

We put so much into our relationships that when they fail, we feel lost. It feels like a part of you has been ripped out of your life and slain right before you.

Because you have lost something.

All a breakup really means, objectively speaking, is that a person is no longer in your life.

A community can help you recover from a breakup and become the strongest version of yourself.

That’s why I want to tell you about my exclusive coaching program, led by my team of experienced men’s coaches and me.

See, this program isn’t only going to help you break free from nice guy behaviors, build quality romantic relationships, and become a stronger Grounded Man. It will also provide you with support from both myself and my elite community of men. Our coaches provide informed professional advice on pursuing women who are right for you.

To pursue the best women possible, you first need to learn how to grow.

With this program, you’ll be tapped into your own “band of brothers,” have access to the best training course for men today, and have weekly calls with my team of inspiring and determined coaches. No boys, complainers, or dabblers; this program is for serious men only.