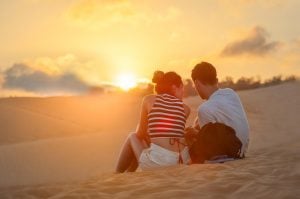 Most men have had moments where they just missed a girl’s signals, only to realize it months or even years after the fact.

It’s sad, but it’s true. Sometimes, a typical guy won’t even recognize what happened after someone says it.

Whether men want to recognize it or not, society has a way of dissuading them from believing that they can be attractive enough to get women’s attention. This is one of the main lessons that men have to unlearn if they want to be happy in life.

We all have moments that make us wonder what we were thinking.

A little bit of knowledge can prevent more of those moments from happening. If you want to maximize your chances of finding that perfect, stable long-term relationship, you need to get clued in on when a girl is showing interest.

The first thing you need to do is be open to the idea that you can be attractive.

Did you ever notice how common it is to put down men based on their looks?

More often than not, toxic dating advice tells men that they are virtually worthless if they don’t have a six-pack and stand taller than six feet. It’s insane, and more importantly, it is not true.

Men don’t need to be a walking Ken doll in order to be attractive to women, and that kind of thinking is the easiest way to alienate yourself from a potential date. Don’t let the negativity of others keep you from knowing your worth.

There is so much toxicity surrounding the advice that men are given or the propaganda that surrounds attraction. If you have people in your vicinity that are giving you discouraging advice, then it may be time to tune them out.

Contrary to popular belief, women are not a monolith. Some women prefer slender men who are clean-cut. Others prefer the big, beefy lumberjack look.

Simply put, a woman who is interested in your type can have a thing for you—and trust me, you are someone’s type.

Signs a girl is attracted to you

Women are far more subtle than men when it comes to indicating interest, and that’s an undeniable fact.

However, that doesn’t mean that they just exist and pray for you to come over them. You just have to keep your eyes out for common moves.

Let’s look at the most common signs that indicate potential interest.

1. An interested girl will want to get to know you

This can be a sign that she’s friendly, or that she’s actually interested. It’s important to note that for many women, it could just be a friendly personality. However, while some girls are just friendly, all girls who are interested will want to learn more about you.

The easiest way to parse out the difference between being friendly and being interested is by gauging how much she prioritizes you.

If she goes out of her way to talk to you or chooses to hang out with you over other people, chances are she wants to be more than a friend.

A good rule of thumb is that you’re doing something right if girls are comfortable enough around you to talk to you. At the very least, you might make a friend. At most, you might find the love of your life.

2. When you tell her a detail about your life, she remembers it

That’s normal because let’s face it, most people don’t care about the nitty-gritty details of other peoples’ lives.

When a girl is interested in you, she will make an effort to learn about you—and that means that she will go out of her way to remember details that most other people won’t bother with.

For example, she might remember your favorite cupcake flavor or remember a restaurant you enjoy.

Take note when a girl is able to remember those little details. It may mean that she sees you as more than a friend.

3. She compliments you or tries to get your attention

Compliments are very rarely ever given platonically by women to men. If she’s complimenting you, chances are high that she’s at least slightly interested in you.

A surefire way to tell is if she starts trying to get your attention in one way or another alongside compliments.

A girl who is socially awkward may do something like follow you around, or come up with a reason to get your opinion on something obvious. If she’s acting like a lost puppy whenever you’re nearby, she wants you.

4. Her friends may encourage you to talk to her

Men aren’t the only ones who get super shy around people they admire.

Sometimes, it happens to girls, too. When it does, the girl in question probably ends up freezing up as a result of the nervousness she feels.

Unlike guys, girls tend to lean on their friends when they become too nervous to actually flirt with a guy.

Depending on the crowd, her friends might approach you and ask you to talk to her for her. You can’t get a clearer signal than that.

5. You catch her stealing glances at you

Did you ever see a girl who was so pretty, that you couldn’t actually stop looking at her? It can be hard to pull away from your eyes from someone who strikes you as incredibly good-looking.

This urge to look at sexy people isn’t just a male thing, it’s a human thing.

A girl who keeps looking at you probably has a pretty big crush on you. The best thing you can do is approach her and see how things work out.

Every time you talk, you notice that she holds eye contact slightly longer than she would with others.

This is a move that is subconscious. When people fall in love, one of the first things that happen is they start to hold eye contact with the person they love slightly longer. Usually, that prolonged eye contact is only a second or two extra.

Take a look at how she behaves with others around you. Does she pull her eyes away from most others? If she keeps looking at you, even after she’s done talking, chances are high that she’s interested.

6. She may also fish for compliments

Sometimes, a girl who isn’t sure how to get you to engage with her may start to do actions that involve encouraging you to give her compliments.

She might put herself down, mumble about not having a date, or do similar stuff.

At times, she may complain about her waistline or similar, then give you a puppy dog-eyed look. A girl who’s doing this is trying to drop hints.

Take the hint, but be careful. Girls who do this don’t always make for good partners.

7. The girl loves to touch you

Does she seem to come up with reasons to touch you? People generally don’t touch people they are not interested in.

If you notice her putting a hand on your back, running a finger up your arm, or even picking lint off your shirt, it’s a sign she’s into you.

The question now is, what do you do with the information you have?

If you’re single and ready to mingle, it’s okay to strike up a conversation with a girl who seems interested in you.

What happens from that conversation is entirely up to the two of you, but it’s always best to go in with no expectations.

Like with most social matters, it’s still (kind of) the luck of the draw. It’s important to remember that some girls are just naturally flirty—and that’s fine.

At the very least, engaging in a little flirt session with her will give you a fun conversation and a confidence boost.

Mixed signals and misreads happen, even with the most skillful flirts in the world. That’s also fine. If nothing else, it’s just a part of the strange world of dating. As Sigmund Freud once said, “Sometimes a cigar is just a cigar.”

When you are able to figure out who’s into you, you can figure out who to approach. Yet, learning the full art of flirtation and seduction is not as easy as people make it out to be. Dating is one of the very few aspects of life that can’t entirely be taught through the use of a book.

And what can be even more maddening is that no one ever seems to tell you how to talk to girls. You’re just supposed to know. But, how can you know what to do if no one ever tells you what works?!

You can win her heart with the right coaching.

Are you tired of playing the dating game you don’t know the rules to? You are not alone. Many men all over the world have a hard time determining whether or not a woman is interested in them.

In order to get the kind of relationship that most men dream about, you need to be able to communicate effectively and also channel the masculine side that women crave. This isn’t easy and it’s something that you have to tune into. More importantly, this is something that you can’t just read about.

You are hurting right now. You’re struggling, trying to win a game that no one ever told you the rules to, but you don’t have to be like this. A mentor can help you learn how to attract women and understand what they are asking you to do.

There are no boys, no complainers or dabblers, this program is for serious men only.