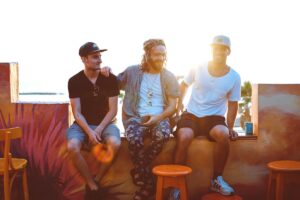 If you want to live a life you’re proud of, you have to stop being nice.

Being nice is good when you’re getting groceries or ordering at a restaurant, but when it comes to dating, being a “nice guy” is catastrophic for your relationship potential.

The world needs kind, strong men, and we just don’t teach men how to be this way anymore. Instead, many modern men have been beaten into submission by a world that forces them to sit down, shut up, and do what they’re told.

Audacious men are a rarity in today’s world, and we’re well aware of that. We want you to be the strongest version of yourself possible. We want you to kick nice guy syndrome once and for all.

The best way to do that is to join a no-mre Mr. nice guy support group of like-minded men.

The first shift that will have to happen for any recovering nice guy is that he will have to unravel his current belief system.

He will need to fundamentally change his morality.

This is not easy, but it is essential for men to do. If you are constantly going through the world feeling used, manipulated, and taken advantage of in your relationships, it doesn’t matter if you’re a “good guy”.

You might be a good guy, but you’re a good guy who gets taken advantage of.

Is that what you really want out of your life?

Being in a group of guys who also understand the deep problems with “nice guy-ism” will help you learn (and unlearn) the behaviors that will make you into the man that you want to be.

Here are 7 reasons why a men’s coaching group can help you drop being “a nice guy” and make you a strong man.

1. You’ll Learn How to Stand Up For Yourself

The first thing that any man needs to learn is how to stand up for himself.

For someone who thinks of themself as a nice guy, the struggle in the early stages of the personal development journey requires a great deal of learning to build self-esteem and confidence. It’s essential to be able to stand up in the face of adversity and stand up for what you deserve.

Standing up for yourself and being confident also makes you more attractive to women.

By working with others, you’ll have your efforts to build confidence validated, and you’ll also be able to go through the journey with people who have the same struggles as you from people who have beaten the very problem you’re struggling with.

A no more Mr. Nice Guy support group can make you into the confident man you’ve always wanted to be.

2. You’ll Start Focusing On Your Own Life More

The hardest part about being a “nice guy” is that your life is constantly second to that of the women and other people in your life.

Your life is not the life you’re spending the most amount of time invested in.

By working in a support group, you learn how to make the latter your reality.

Learning how to take care of yourself is the key to dropping nice guy behaviors.

3. A “Nice Guy” Can’t Support Other People (Without People Pleasing)

The irony of a nice guy’s life is that he cannot take care of anyone, and that’s all he tries to do.

Nice guys are incompetent providers, yet all they try to do is try to provide for others.

Nice guys are like blind men trying to become professional baseball players or dolphins trying to play Stairway to Heaven on the electric guitar.

They’re doing something that fundamentally goes against their biology.

See, being a nice guy is really just a form of people-pleasing. People pleasers by definition think they’re doing something good. They think they’re being kind.

However, in the end, what really happens is that they get used.

You might think you attract abusive people or that abusive people gravitate toward you, but that’s not it. The truth is that by people pleasing, you are opening yourself up to abuse. You are making yourself an easier target for being manipulated by others.

When you’re in a support group, you’ll have accountability partners built in (the other members of the group), and they won’t tolerate your people-pleasing behaviors because they will bring the group down.

You’ll be forced to confront your people-pleasing head-on, and you might not love what you find.

You’ll want your group members there to support you when you do.

4. You’ll Learn the Real Reason Why Nice Guys Exist (and You Won’t Like It)

Nice guys exist because they are insecure.

Think about being a nice guy like being out of shape.

When you’re out of shape, you go through life tired, insecure, and feeling constantly physically inadequate. Being a nice guy is the social equivalent of this, and it’s to be avoided at all costs.

What we want to do is help you build the strength to be a man who stands independently.

5. You’ll Start Questioning Everything, Even Your Own Life

Being in a no more Mr. Nice Guy support group can be huge for your confidence, but we’ve already talked about that.

A lack of personal power is only part of the negative effects of nice guy syndrome.

As you start to build confidence with the other members of your support group, you’ll start to question things that were once core beliefs for you. You’ll realize that your belief system is not inherently correct and that the way that you are treating people is just a thing you’ve invented based on your life experiences.

Morality is created, and it’s a necessary part of the human experience, but that doesn’t mean that the way that you are living right now is the best way to live.

The support group will challenge your core beliefs, and it will force you to reconsider the way that you’re thinking about the world around you.

Being a nice guy is passive and accepting, and we don’t want to be that way. We want to be bold, confident, and courageous.

We want to be kind, not nice. The way that you do this is to have the audacity to question your reality.

That’s what it means to stop being a nice guy and start being a strong man.

It doesn’t mean you’re becoming a jerk, either. It means that you’re learning what genuine social connection is all about.

Get ready to start living for real.

When you start to drop nice guy behaviors, people are going to think you’re a jerk.

If they’re used to you people pleasing, being passive, and doing whatever they wnat you to do, the sudden change is going to throw them for a loop. If you like to use people, it’s annoying when someone you’re used to using no longer is willing to be used.

For you, as a recovering nice guy, this will be uncomfortable at first. You’ll start to feel like you’re doing something wrong.

This is when you need to learn the difference between being “a nice guy” and being “a kind man”. Your support group will help you with this because your coaches are aware of this distinction.

You can be kind without being passive.

Kindness is a genuine emotion – it requires empathy, compassion, and respect.

Being nice requires nothing. Nice guy syndrome is dissociative from reality and can exist regardless of circumstances.

Nice guys exist everywhere, but that doesn’t mean that they care about you. You’re nice to a stranger you meet on the street because there’s no reason to be rude to them.

You shouldn’t be the same in your relationships. Instead, you must aim to be kind to important people in your life. This kindness will help you develop a genuine connection with your support group members, romantic partners, and anyone else you want to have genuine connections with.

The obvious reason that a support group designed around ending nice guy behaviors works is that, well, the goal of the group is to stop you from allowing niceness to run your life.

Your coaches aren’t going to be nice to you. They’ve beaten nice guy syndrome – now it’s your turn. If you want to hang out with nice guys, you’ve come to the wrong place.

This is what you want out of a support group, and in a group that is designed around building strength and chasing genuine personal growth, nice guy syndrome cannot survive.

You are going to have to work hard, and if your nice guy syndrome is as bad as you think it is, you’ll probably experience a lot of discomfort in the early days in the support group.

However, this discomfort is essential for ending your nice personality once and for all.

We want you to be strong.

Don’t you want that for yourself?

The old saying “nice guys finish last” is a hard fact of life that men have been taught to drop from their belief systems.

As a man, you’re taught that niceness and kindness are the same things. This is false.

Niceness is to avoid conflict. Kindness is to enhance the world.

Being “nice” is passive. It’s doing what is expected.

If you’re ordering at a restaurant, it’s fine to be nice. However, if you’re in a relationship with a woman you’re attracted to, she’s going to eventually view your niceness as a weakness. Women are smart – they can tell when you’re weak.

The only solution is to stop being weak. The solution is the strength you get from getting out of your comfort zone.

However, in today’s world, the cultivation of strength can be a challenge. It’s really hard to find men who can teach you how to drop niceness in the name of true confidence and kindness.

That’s why I want to tell you about my exclusive coaching program, led by me and my team of experienced men’s coaches.

We want you to be strong.

See, this program isn’t only going to help you break free from nice guy behaviors, build quality romantic relationships, and become a stronger Grounded Man. It’s also going to provide you with support from both myself and my elite community of men. Our coaches provide informed professional advice on how to play hard to get, among other important relationship principles.

No drama, no games, just growth. This will be the last self-development group you’ll ever need.

With this program, you’ll be tapped into your own “band of brothers” and you’ll also have access to the best training course for men in existence today, as well as weekly calls with my team of inspiring and determined coaches. There are no boys, no complainers, or dabblers, this program is for serious men only.