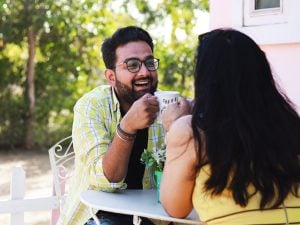 When you have had a great first date, it’s a moment worth celebrating. Dating isn’t easy, and getting her to say yes to the first date is an accomplishment.

Now, you’re feeling her. You want more with her. How do you ask a girl for a second date?

It feels like it should be an obvious answer, but the truth is that it can be intimidating. You don’t want to sound desperate or weird, but you want to make your intention known.

We all have heard of moments when a guy asked for a second date, only to have the way he asked put the girl off the idea. You don’t want to be that guy, but at the same time, you don’t want to overthink it.

Asking for a second date doesn’t have to be a big ordeal. Here’s how to do it and get closer to that loving relationship you’ve always wanted to have.

1. Have an excellent first date first

More often than not, women tend to nix a second date if they had a bad time during the first date.

This means that your best approach is to ensure you have an excellent first date, ideally one that is all about her and getting to know her.

In other words, you want to be the guy who doesn’t spend the date playing games on your console or going to a bar to root for your favorite team during football night. You want to be the one asking questions about her, planning a great date idea, and giving her tons of fun memories.

If you start in a venue that helps you build a good rapport (like that swanky new exhibit or new restaurant), she’ll be more interested in seeing what you suggest next.

Dating is not meant to be boring for either of you, it should be fun.

2. Thank her for a good time

Not sure how to ask for a second date? Sometimes, the easiest way to broach the subject is to take the lead by thanking her for spending time with you.

Most women aren’t told “thank you” for going out with a guy. This is the easiest way to ensure that she knows you’re interested in her and that you genuinely enjoy having fun with her.

Over the next couple of days (between your first and next date), talk about inside jokes you have with her or mention things you found extraordinary about her. It’ll make her feel special and more amenable to seeing you again.

3. Get the timing right

Sometimes, it’s all about timing. Don’t be afraid to ask her for a second date at the end of the first one.

If you want to show that you’re confident, then don’t be afraid to tell her (in a casual manner) that you want a second date.

Women appreciate men who don’t play games or “beat around the bush” as long as they don’t look too eager.

The best way to do this is to keep the conversation casual and say something like, “Hey, I had a great time tonight. Do you wanna do this again sometime soon?”

It’s short, sweet, and to the point. If you want to reduce pressure on her, ask her via a call or text rather than in-person. If she says yes, start talking about your next date idea and then make it happen.

If she doesn’t reply or seems uncomfortable, leave the ball in her lap and don’t text her anymore. Don’t corner her or try to “sell her” into dating you. This is what desperation looks like.

4. Text her later, within the next three days

Sooner is always a little better than later.

If a woman is interested in you and genuinely feels the connection, it will not matter if you call her the next day or in the next two days. She will be happy to hear from you.

If you wait a week or so to ask her, she may get the wrong message and assume you are not that interested.

5. Don’t be vague when asking her out

In all honesty, there are very few wrong answers to this question. Calling, texting, and even in-person questions can all work depending on the situation. Let’s look at some of the more common techniques that work.

The number one mistake men make is being vague.

If you end your date by saying, “That was cool. We should do it again sometime,” you’re leaving things open-ended. This (and phrases like it) can be legitimate asks for a second date, or it could be an excellent way to say it’s not going to happen.

If you say you want to “do this again sometime,” you may need a follow-up plan. For example, if she agrees, you might want to ask her about that new movie that’s screening or get a solid day and time.

6. Ask her to join plans you already have

Our society makes a point of telling women that idle men are dangerous men, and not in a sexy way. Women find men who live full lives attractive.

You can become more attractive by showing others you have a full schedule.

Being the guy who asks her to join in on things you are going to do makes you look confident enough and keeps pressure low.

After all, it’s tough to sound desperate if you are talking about going to a party with your friends. These lines often help when you ask for a second date:

The idea here is to keep it cool and show you have enough confidence to ask her directly.

7. Be honest and straightforward

Ask when the next time you can talk to her in person.

Feeling a bit shy? Not sure whether you’re ready to leap?

Sometimes it’s best to keep it to text and come up with a reason to talk to her in person. Tell her you’ll spill the beans in person, whether it’s just a story that caught your interest or a funny story.

8. Have a positive attitude

Desperation is an attitude, not a mood. The right approach to dating always involves avoiding desperation. This means:

Get the relationship you want with the right men’s coach.

The numbers are in, and it’s clear that dating has become incredibly difficult for men. Most men agree that dating is more complicated than ever. Even getting that first date is an uphill battle, but it doesn’t have to be.

There are ways to attract the right woman to you and get the supportive, meaningful relationship you’ve always wanted. However, you need guidance. You’re right if you feel like it’s a game where you constantly have to guess the rules.

Modern dating can be confusing and complicated, especially if you are not used to trying to connect with others. Our program will require you to confront your issues head-on, and the rewards for doing so are life-changing. Are you ready for it, though?