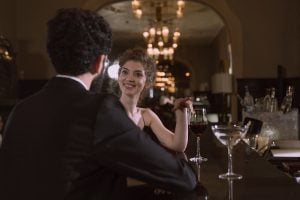 We’ve all seen that guy with his girlfriend, only to ask, “Is she going out with him?”

A certain belief most men have taken to heart is not to try to date out of your league because they believe girls who are way more attractive than them won’t stay.

This isn’t true! Men can get women considered “out of their league,” become partners or even get married.

Most men have spent time thinking about their dream girl, the girl they couldn’t ever seem to get close to. If you’re wondering whether it’s possible to date her, it could be. She doesn’t have to be the one that got away!

Most people want to develop a relationship with someone they see as above them. We all want to be the guy that other men wish they could be, especially in the dating scene. We all want to find someone who pushes us to be a better man.

Too many guys give up before they even try. Let’s talk about how you could be dating the girl above and beyond your league.

The Difficult Reality Of Dating A Girl Out Of Your League

Without a doubt, the men I’ve coached all loved the idea of being able to get a girl out of their league. However, there can be a feeling of being “the dog that caught the wheel” when it happens in real life.

Many men tend to feel inadequate with an extremely attractive girl, especially if she is wealthier. You’re left there, wondering how you can impress her and what you can provide.

To make matters worse, other men might try to shake up the relationship you have. They may try to give you bad relationship advice, flirt with her, or make you look like a fool. Dating women like this will challenge your self-worth if you are not careful.

This can turn dating your dream girl into a nightmare and even cause you to feel you need to undermine her confidence to keep her with you. That insecurity you may feel could sabotage the very relationship you dreamed of having for so long.

If you want to live a life where your girlfriend is of a different social status or league, you must cultivate that confidence in your masculinity. You cannot let yourself feel threatened when other men try to dig at you or when she’s out alone.

She comes home to you, and you’re the one she wants! If she weren’t interested in you she wouldn’t be dating you. Remember that!

How To Get A Girl Out Of Your League

1. Stop placing that woman on a pedestal

Let’s talk about a small memory I had when I was younger. I once knew someone who told others, “If you put her on a pedestal, she will have no choice but to look down upon you.”

Humans are wired to treat others who idolize them with suspicion.

When you’re putting her up on a pedestal and acting like she’s so much better than you, the first thing she’s going to wonder is why she should spend time with you. She might wonder if you’re after her for social status or money.

Remind yourself that she’s still a human being. She’s better than you could ever imagine, but that doesn’t mean she doesn’t have flaws. Respect that and stop acting star-struck, and above all, don’t grovel for attention or treat her like some alien species.

2. Work on your confidence

It may sound like hackneyed relationship advice: confidence is key!

A confident man doesn’t have to worry if he’s “worthy” or “enough” for a girl. You need to get rid of your insecurities and-

Finally, it’s important to remember that you should never be afraid to walk away from a girl. If she’s not putting in the effort to meet you, then she will not respect you if you keep trying to get her to catch your feelings.

Women are far more likely to be interested in a man if he is confident enough to say, “Hey, this has been cool and everything, but I’m not feeling this. I’ll catch you around.”

3. Learn about her personality first, and don’t be afraid to make the first move

You’re worried that she’ll look at you and decide you’re not it. But you may have forgotten something about dating. Believe it or not, you have to screen her too. Superficially, she might be attractive, but that doesn’t mean you’re compatible with her.

The best way to treat a woman who is way above your social status is to act like she’s any other human being on the planet. Like any typical girl, you have to figure out if you’re even into her (aside from her looks.)

In other words, go up to her and say hello. Treat her how you would a person who you want to befriend:

If you feel intimidated by women, your go-to first move is to flaunt everything you got in hopes that she will not laugh you off. It’s a common reaction, but it hurts your chances of getting women interested in you.

Women hear men bragging about things all day long, and it’s not attractive to them. It’s not cute. It comes off as self-centered, insecure, and worse, socially deaf. When they hear a guy bragging and boasting, women assume he’s a faker and a liar.

A better approach would be to let your life speak for you. For example, rather than saying you’re wealthy, show your generosity by buying her a drink. Instead of telling people you’re a nice guy, do nice things or let others talk you up. When you are a certain trait, you don’t have to tell the world about it. You just are.

3. Remember, the most attractive thing women first notice in men is seeing them having fun on their terms

Male or female, we all want to be on a team that boasts people who are having a good time. We want to be in the limo, sipping champagne, surrounded by friends. Being on the winning team is attractive, and so is knowing you will enjoy yourself on a date.

When women crush on a guy, it’s because he’s selling a carefree time that’s emotionally fulfilling. They want to know that the guy they’re dating will make them smile. This is why planning a date and taking the lead on that front is such a masculine thing to do.

When was the last time you did something that made an amazing memory? Whether it was surfing, skating, or even hitting a rave, chances are that it stood out in your mind. Now would be a good time to commit to getting out there.

A good rule of thumb is that you shouldn’t always go for hobbies that women traditionally find attractive. Being attractive means realizing that you don’t always have to do things for women’s approval. That includes your choice of hobbies.

Where do you even find hyper-attractive girls?

Remember, attraction is in the eye of the beholder.

The fastest way to find women compatible with you is to think of the type of personality you want in a partner.

For example, if your idea of a girl being “out of your league” is a girl who is very conservative and traditional, a church would be a good choice. With that said, the venues below are the most likely places to find gorgeous women.

Gorgeous women are far more likely to go out to concerts and similar parties. They are there to network with others, find Mr. Right, or have a good time. Parties, even if you have to pay to get in, are a reliable place to find a girl.

These venues also make it easy to start a conversation with her, even if it’s something along the lines of the DJ’s music.

Do you like gorgeous women with a geeky twist? If you’re okay with a lot of competition, you might be able to find a dream girl at an anime convention. Girls here often model their cosplays, which means you can talk about favorite shows and compliment her looks.

It’s important to remember that most girls here will be surprised if you ignore her looks and just start talking about other things. They’re used to being ogled. They’re not used to being talked to in a friendly and warm manner.

With gyms, you can find women who take weight loss seriously. However, you have to be careful here. You don’t want to crowd her while she’s exercising. If you see her frequently, start by saying hello when you see her.

From there, you can gauge whether or not she seems interested in talking to you. If she’s friendly at the very least, you may have a chance.

Those bikinis won’t lie. Women who tend to congregate near water tend to try to keep their figures trim and are more likely to be health-conscious. Besides, who doesn’t like being able to hang out and show off your backstroke?

You can win her over with the right coach’s help

Does it feel like you’re losing hope in your ability to attract a partner, or like your life is one where you constantly have to negotiate on your dreams? This does not have to be your fate.

In most cases, men lose out on the lives they want to lead because they keep being told the wrong things by a society that doesn’t care about them. You don’t have to settle for a girl you aren’t interested in.

To attract the type of women other men dream of, you must align your own life. This starts with taking control of your life and working towards the goals that will enrich you rather than what society expects you to do.

The right coach will have the experience of being where you are and the honest advice you need to hear about attracting women that will give you a loving relationship.

You might be hurting for a relationship, feeling down on yourself, or confused about why nothing you’ve tried has worked in the past. If you’re ready to turn your life around, this program is for you.