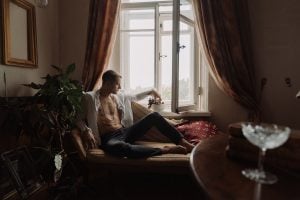 Some people think that the opposite of ruthless, aggressive, “toxic masculinity” is healthy masculinity, but it’s not.

That’s why I want to help you do it.

Healthy masculinity is possible and it might not be as far away as you think.

What Is Fragile Masculinity?

Fragile masculinity isn’t just weakness or anxiety, it’s the envy of men that you believe have more than you. It’s the hatred you might have for powerful men. Fragile masculinity is the sensation that the world around is crumbling and that everyone around you is realizing how much of a man you aren’t.

This is because fragile masculinity is a symptom of toxic masculinity.

If you learned anything from the section above, it should have been that fragile masculinity is more than just insecurity.

However, being insecure about your masculinity is one of the telltale signs of fragile masculinity.

This is because fragile masculinity is in many ways a reaction to toxic masculinity. A man grows up around toxic masculinity – anger, aggression, ignorance. He’s molded to live in a world where he is never tough enough, never strong enough, and never “man enough”.

He feels weak and fragile in the world because he’s never felt safe.

Typically, there are 3 things that happen to men who grow up around a lot of toxic masculinity.

In the best-case scenario, these men see through toxic masculinity and are able to create their own set of healthy masculinity values. Unfortunately, this doesn’t happen as often as it could.

Another thing that can happen is that men can learn to embody toxic masculinity and further spread the ideas that raised them to be destructive and angry. This isn’t great because it propagates an already destructive culture.

He might wear a front of strength and Stoicism, but once you dig a bit, this man is weak. This man is afraid and anxious.

Fragile masculinity sometimes hides in the shadows. Fragile men hide from confronting the issues of their masculinity head-on.

These are the 3 telltale signs of a fragile man.

In your life, every time you confront an issue, a spouse, another person, or just your own demons, you run the risk of losing.

You run the risk of defeat.

This is a part of confrontation in all of our lives, but fragile people can’t handle losing so badly that they refuse to even attempt to engage in conflict during their lives.

Have you ever known someone who was irrationally competitive over the smallest things (even something small, like the pool at the office), but never actually engaged with real confrontation in their life? They were probably a bit fragile.

Avoiding confrontation is seen by fragile men as a way of protecting their egos.

2. Fragile Men Are Constantly Comparing Themselves to Others

Sure, not every Instagram account targeting men is bad, but there are a lot of people online who are creating angry and confused men by misinforming them about conceptions of masculinity.

Worse still, social media alters the way that you think. It distorts your values.

This isn’t destructive for young men who are battling fragility and dealing with a personal identity crisis.

Social media makes you compare your life to others.

If you’re a man, it can make you compare your manhood to other men.

This is essentially fragile masculinity created through the internet, but for many men, the behavior continues when they turn off the phone.

The biggest sign that a man is struggling with fragile masculinity is that he is deeply afraid.

All of the signs of fragile masculinity that I have listed have one key common element… anxiety.

Anxious and fragile men allow fear to run their life. They are a slave to the beliefs that the world around them has prescribed, and they allow these beliefs to hold them back, beat them down, and force them into submission.

They’re scared and they don’t know what to do about it, so they do nothing.

From what we’ve already elaborated on, it’s clear fragile masculinity is damaging to men’s mental health, sense of self, and happiness.

However, what’s even more dangerous are the effects that fragile masculinity has on relationships.

Men who are constantly battling fragile masculinity are in an identity crisis, and because of this, they struggle to represent themselves in romantic relationships.

This is a really big problem for many men today, especially young men who are trying to establish their identities in the world.

Here are 3 of the most common ways that fragile masculinity can ruin your connection with that special someone:

A study found that women may alter their behavior in order to protect their partner’s sense of their manhood.

Because of this, women who believe that their partners are fragile about their masculinity will have lower sexual satisfaction. They are more likely to fake orgasms and be unhappy in their sex lives.

In addition to ruining your sex life, fragile masculinity will also distort your ability to communicate with your partner, and honest communication is crucial for a happy and healthy relationship.

Men who are anxious about their masculinity often withhold personal details about themselves that would make their relationships better, and this makes communication very difficult for them.

Dishonest communication is the building block for resentment, and resentment leads to anger and in the worst cases, abusive and violent behavior.

3. Fragile Masculinity Can Lead to Overextension

When a relationship is damaged by toxic masculinity, it can lead to men not acknowledging their partner’s needs.

When a relationship is damaged by fragile masculinity, we see the opposite.

In a relationship as a fragile man, the man will do whatever they have to do to keep their partner happy, even if it means damaging their self-worth and happiness.

These men sacrifice their happiness and their personal needs to keep their masculinity in check.

Fragile men will make themselves miserable to keep their partners happy. They are compensating for being insecure and fragile by overextending themselves.

This gives women an unrealistic idea of what to expect, and it makes the men unhappy because they are exhausted.

3 Ways to Deal With Fragile Masculinity

Fragile men will rarely tell you that they feel that their masculinity feels threatened because doing so would make them look weak to toxic men.

As a result, many men who struggle with fragile masculinity suffer in silence.

However, there is a way out.

It isn’t easy, but nothing worth it ever really is.

Here are 3 ways you can overcome fragile masculinity.

1. Talk About Your Fragile Masculinity

Eventually, you have to get over the hump.

The first way to get past fragile masculinity is to acknowledge the elephant in the room.

Overcoming this is very simple, but it’s also very difficult. You have a lot of conversations about difficult topics.

Luckily, the more you practice and the more you talk, the easier this becomes. It’s even easier when you surround yourself with a support system of like-minded men.

2. Educate Yourself About Masculinity and Establish Your Masculine Values

Research shows that most men don’t actually agree with traditional masculine values, but most men still go along with them out of fear and fragility.

It requires a lot of courage to build a healthy masculine identity.

To get started in your quest for healthy masculinity, start educating yourself. Read. Meditate. Think. Try things. Talk to men. Talk to women.

Through all of these experiences, you will develop a stronger sense of what masculinity means to you. This will ease feelings of fragile masculinity.

3. Surround Yourself With Healthy Men

They say that you are a product of the 5 people you spend the most time with.

This creates problems for many men who are trying to defeat fragile masculinity.

Anyone can read about healthy masculinity online or study scholarly articles written by psychologists with PhDs, but if you’re still surrounding yourself with the same toxic and fragile men on a daily basis, it’s going to be very difficult for you to actually implement your newfound knowledge into your life.

It’s difficult to be a healthy man when you’re only around men who aren’t healthy.

Surround yourself with healthy men.

Breaking free from fragile masculinity is tough, but you can do it.

You can overcome fear, insecurity, and anxiety to become not just a strong man, but a healthy one.

You can do this by having difficult conversations, studying the art of manhood, and, most importantly in my opinion, surrounding yourself with a community of strong, grounded men.

That might be the most important benefit of signing up for my exclusive coaching program, led by me and my team of experienced men’s coaches.

See, this program isn’t only going to help you break free from nice guy behaviors, build quality romantic relationships, and become a stronger Grounded Man. It’s also going to provide you with support from both myself and my elite community of men.

When it comes to freeing yourself from fragile masculinity, that might be the most important thing.

With this program, you’ll be tapped into your own “band of brothers” and you’ll also have access to the best training course for men that exist today, as well as weekly calls with my team of inspiring and determined coaches. There are no boys, no complainers or dabblers, this program is for serious men only.

HEY, do you want my help?

1. Inside the private members area, my team, community of high performing men and I can answer your questions to help you get custom-tailored answers for your specific situation.

3. Get access to badass online courses to transform your life, reach your highest potential, and live an epic life. It’s a killer deal and I’m not asking for much. Just click the button below to see everything you’re going to get!