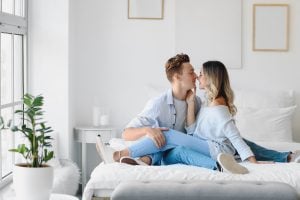 We have all seen a man who is big and brave when single but seems to crumble into a pile of ashes when he’s in a relationship. It’s almost as if someone flipped a switch.

One minute, he’s still just as manly as ever. Next, he’s wearing an apron, babysitting, and watching the worst romantic comedies since The Notebook.

Losing yourself in a relationship is a universal issue. However, when you’re a man and you no longer feel in touch with your masculine edge, it’s devastating.

You lose what makes you, you. Masculinity is a source of pride in every man, which is why it’s so important to stay in touch with it.

Though it’s rarely discussed, losing your masculine edge in a relationship can and does happen—quite a bit, really.

Masculinity has a lot of definitions

There is no such thing as a man who is purely masculine.

Being a man means that you have the emotional strength and that you can be the one to take charge when need be. But, it can also mean being the support your wife needs when she breaks down in tears. See what we mean?

You do not have to guzzle beer, be a lumberjack, and smoke cigars to be a man. When you feel like a man, you’re a man. The man who owns a cat and relaxes to bossa nova can be just as manly as the man going on safari.

Masculinity is something that is felt and experienced—and it takes many forms.

Just because you’re not skydiving with Dwayne “the Rock” Johnson doesn’t mean you’re not a man. With that said, there’s a major question that deserves to be asked.

Signs you’re losing your masculine edge in a relationship

Therein lies the crux of the question, and it’s one that is hard to nail down in words. However, there are a couple of telltale signs that you might be losing your masculine edge in your relationships:

8 ways to regain your masculinity in a relationship

If you’re noticing warning signs that you’re losing your masculinity in a relationship, it’s time to take charge and realign yourself with your manhood.

By implementing the 8 principles below, you will discover ways to reclaim control and regain masculinity in your relationship.

1. Re-establish your boundaries and enforce them

There are a few things that will erode a person’s sense of self like having no boundaries and letting people walk all over you.

In many cases, this is why relationships start to emasculate men and why women lose respect for you.

If you feel like you’re regularly disrespected or have your needs dismissed, it may be time to call things off. A relationship has to go both ways, and if she’s just not listening, she’s not the one for you.

2. Don’t feel bad about prioritizing yourself

One of the worst things that happen to men on a regular basis is the guilting when they put themselves first.

Self-love is important for men. You can’t set yourself on fire to keep others warm! Boundaries are part of a healthy relationship, so don’t let anyone tell you otherwise.

3. Ask for help with communication if you need to

Actually establishing healthy boundaries requires tact at times, and many men are not socialized to work with that.

That’s why it often helps to have someone in your corner who can help you figure out how to communicate.

4. Do things that make you feel like a man

Everyone has that one (or two) things that helps them realign with their masculine side—and that’s precisely what you need to start doing.

Once again, it’s important to take time to figure out when you’ve felt your best and what you were doing at that point.

Masculinity takes a lot of different forms. It can be when you’re competing for a 5K, when you’re bodybuilding, when you’re pouring effort into a new business or when you’re making a new song.

Whatever it is, do it for at least half an hour a week. Ideally, you’ll carve out more time for that thing. This is part of prioritizing yourself.

5. Write a list of things that you’ve accomplished in your life

While you might be feeling low right now, it’s important to remember that no one can take away your masculinity unless you let them.

Truthfully, no one can ever take away what masculine things you’ve already done. Sometimes, it’s good to have a reminder of who you are and what you did to put things into perspective.

So, write down a list of all the manly feats you did—from that time you finished a raid in WoW to that one time you did that thing in sports. Keep that list nearby when you’re feeling low.

6. Reach out to your guyfriends and bond with them

There is something truly magical about the bond that men have with their male friends. This is something that every man really needs to experience from time to time.

Hanging out with your bros is one of those things that is just as much a diversion as it is a practice in male health.

Men need other men as friends, guides, and confidantes. If you haven’t done so recently, call your guy friends and ask how they are doing.

7. Learn to drop your fear of the masculine and feminine

If it feels like we live in a society where men are told to embrace their feminine side, then punish them, you’re right.

There is this constant stigma of being too girly as a guy, and it often feels like we police each other in suppressing sides that don’t stick to the narrative.

Part of being truly masculine is realizing that being a “manly man” means you’re comfortable with your feminine side, too.

Just because you have a girly side doesn’t mean you’re any less of a man. Make a point of reassuring yourself that you’re still you, regardless of what society says.

What other people say about you has no bearing on you. They’re saying that, and it’s on them.

8. Realign yourself with the goals that you have for yourself

The key thing to remember about masculinity is that it’s all about leadership and paving your own way in life.

When you’re in a relationship, it’s easy to start to put your actual goals to the side in favor of all the other little things people expect you to do. This is why you might be feeling emasculated.

Women find a grounded man who makes his own way in life attractive. This is doubly true if his goals are ones that are difficult to attain and have a very high standard of performance.

If you need to focus on your career path or your own personal goals, that’s totally fine. In fact, it’s healthy.

Masculinity wanes when you stop taking your own needs and future into account. Write a list of your goals and ask yourself which ones started to slip away from you.

Start putting together a game plan on how you’re going to pursue those goals once more. Then, follow the game plan.

Let’s face it, when you’re in the thick of it, it’s hard to make the right steps to get your masculinity back. Sometimes, it can feel like it’s just too complicated or difficult to work through—even when you know what you need to do.

Part of being able to get yourself back to where you need to be is having the right support network and even leaning on someone who’s been there.

When you have the right support, being able to realign with your masculine side becomes way easier and even intuitive.

Of course, the perks of getting that masculine mojo back go far beyond just feeling better. It makes you attractive to women, can help you get a better job, and also can change the trajectory of your life.

We help make that happen in our exclusive coaching program where you’ll learn, with our band of brothers, to become the best version of yourself, reclaim your masculine edge and improve your life and relationship.