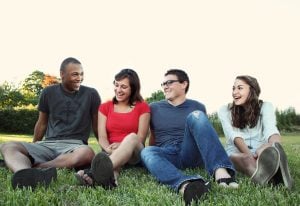 Dating multiple beautiful women at once seems like every guy’s dream.

Growing up, we all see the movies where the billionaire playboy extraordinaire gets out of his Ferrari and walks into the party, one model around each arm. We’ve all wanted to feel like Bruce Wayne or maybe even Barney Stinson from “How I Met Your Mother.”

I get it. What could be better than having several beautiful women giving you all her attention, making you feel like a king, and taking care of you?

Unfortunately, the reality of dating multiple women is nowhere near as exciting as the dream. It’s a little stressful, overwhelming, and in many cases, it’s just not worth it for many guys.

You have to decide if dating multiple people is worth it for you. You have to determine if this is something that you’re ready to deal with.

Know Thyself: Your emotions are good indicators of your future actions

Okay, let’s go back to that scenario we briefly discussed in the beginning…

The one where you have multiple beautiful women giving you all her attention, specifically.

Here’s the reality: she’s probably not giving you all her attention, especially not if you’re not giving her all of yours.

How do you feel about that? When you think about that beautiful woman you like so much (from a distance, of course) snuggling up next to someone else or kissing someone goodnight, what emotions do you feel?

Jealousy? Anger? Nothing at all?

This is an essential test in determining if you can handle dating more than one woman at once.

Your emotions are good indicators of your future actions.

Think about these emotions and how they make you feel. Then choose your next move wisely.

Why Do You Want to Date Multiple Women?

I’m asking you this question at the beginning of this article because I want you to think about it while you read.

Your intentions in dating are essential.

Why do you want to date multiple women?

Are you polyamorous, are you exploring, or do you want people to think you’ve “got a game”?

If that question sounds like a threat to you, you might want to think clearly about your intentions.

I can’t have people reading this article and then using it to justify making themselves worse men and the world around them a more dangerous place.

The hard truth is that some people date multiple women for the wrong reasons. They do it to prove to themselves that girls like them. They do it for external validation. They do it because they’re insecure and need someone else to make them feel whole.

They need someone else to make them feel whole until they realize that that person alone isn’t healing the insecurity in their heart, so they chase more. They look for more and more partners, claiming that they’re either polyamorous or “exploring their options” when in reality, they’re insecure and emotionally undeveloped.

If that segment bothers you, it might apply to you.

If it feels like I’m just ranting, maybe you are polyamorous and want to learn more about the evolutionary history of non-monogamous relationships.

Although Western culture enforces monogamy, there’s never been a consensus on whether human beings are naturally monogamous or non-monogamous.

Some people claim to be polyamorous, and millions of others claim that monogamy is the best way to have a healthy relationship.

Interestingly, a study that interviewed 1500 respondents found no detectable difference in satisfaction and happiness between monogamous and non-monogamous people.

So what does that mean?

That means it’s very likely that in humans, there is something called “sexual dimorphism.”

Don’t let this fancy term scare or intimidate you, either. What sexual dimorphism means is that members of the same species can follow different patterns from reproduction.

At this point, the only thing making life hard for either group is the culturally enforced notions of which behavior is superior.

If you’re reading this article, it’s probably because you want to date more than one woman at once.

I’ve bad news for you: that’s not what society wants you to do.

Even as a man, having more than one partner in your life is still not seen as appropriate.

When I grew up, monogamy was the only real option. People who practiced non-monogamy at home, like “swinging,” polyamory, or some other type of non-monogamy, did it in secret.

This wasn’t something you talked about because it was different. If there’s anything that seems universally true about human beings, it’s that we don’t always do so well with “different.”

People like things the way they like them, and when confronted with uncomfortable ideas or behaviors, they tend to lash out.

However, the world has changed.

Gay marriage is legal now. Polyamory is less stigmatized now. “Love is love” is more than just a bumper sticker; it’s the law.

Socially, the stance on these “alternative lifestyles” is shifting too, but that doesn’t mean there hasn’t been any pushback.

In terms of polyamory versus non-monogamy, many people have very strong feelings about the best way to live, and they all seem to be using the same anecdotes and ideas to support their thesis.

Here’s what I think:

Monogamy Is Natural (If It’s Natural For You)

There’s a lot of argument over whether or not monogamy is “unnatural” behavior.

Furthermore, before Western imperialism, 83% of human societies were non-monogamous.

However, that’s only the tip of the iceberg: just because society allows for non-monogamy does not mean that all of the people in the society end up being polyamorous for their entire lives.

In most cases, most people in polyamorous societies choose one partner.

But still, the evolutionary card is a good one to play because it raises many interesting questions.

If most other animals do not mate for life (or at least for the long term), why should human beings?

Why should I have a monogamous relationship when I want to date more than one person at once?

Both are good questions, and you should think about both of them.

Here’s the truth: you should do whatever you want without being a jerk.

You Can Date Multiple Women but Don’t Be a Jerk

Hurting multiple women in the name of your “self-discovery phase” is even worse.

That’s the thing about dating: all relationships, whether monogamous, non-monogamous, romantic, or platonic, are built on trust and communication.

To connect with someone, you must trust them enough to open up and communicate to strengthen this bond further.

All in all, no matter who you’re dating or how many people you’re dating, do not lie. This is for both you and them.

The dating rules from the past do not apply unless you apply them to yourself. You don’t have to do anything you don’t want to do except treat people with respect.

Even honesty isn’t your obligation, but it’s something I’d suggest you do just so you feel alright with yourself. The point is, however, that you don’t have to follow old dating rules if you don’t like the old dating rules.

The rules you follow are not as important as the fact that you are following rules. You need a moral code, but it doesn’t need to be the same as the one your parents follow, or the Catholic church follows.

Treat other people the way that you want to be treated.

It sounds corny and obvious, but you’d be lying if you didn’t admit that basic decency wasn’t still a challenge for some people.

Your Preference in Relationships May Change Throughout Your Life

There is a real incentive for polyamory to be popular with young people.

You want to have relationships with as many people as possible, but you also want the safety and companionship of a monogamous relationship. That’s why healthy polyamory is attractive to so many young people.

Studies have found young people to be more open to non-monogamous relationships. However, this is more complicated than you think.

Your preference in relationships may change throughout your life. When you’re young, you may love polyamory. As you get older, this could shift.

If you want to date multiple women at once, you are allowed to. Just make sure you’re doing it for the right reasons.

However, relationships are serious, and in the journey of becoming the man you are meant to be, you will be forced to confront the importance of these relationships time and time again.

You will be forced to have difficult conversations. If you’re truly ready for great relationships, monogamous or not, you must learn to treat all people with empathy and compassion.

There’s not much else to having great relationships. That’s the dating secret most guys will never figure out.

Do you know yourself well enough to know exactly what type of relationship you want? Or do you need help with the process of discovering your true relationship self?

If you are in the latter category, you’re in luck because self-discovery is exactly what I help you do with my exclusive coaching program.

See, this program isn’t only going to help you break free from nice guy behaviors, build quality romantic relationships, and become a stronger Grounded Man. It will also provide you with support from both myself and my elite community of men.

You’ll be tapped into your own “band of brothers” and have access to the best training course for men today, as well as weekly calls with my team of inspiring and determined coaches. There are no boys, no complainers or dabblers, this program is for serious men only.