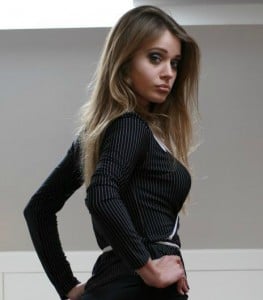 Kezia Noble, world’s leading dating expert for men, published author of best selling book “Noble Art Of Seducing Women” is a regular newspaper and magazine columnist as well as frequently appearing as a guest expert on TV shows across the globe.

Word of Kezia’s sold out international bootcamps and her videos that received well over 10 million views, that made her a ‘Youtube sensation’, spread to one of the most highly acclaimed publishing companies in the world, and in turn they offered her a chance to write what has now become a top selling book “The Noble Art Of Seducing Women” This has lead to many media requests, and Kezia is now regularly featured in international newspapers/magazines and TV shows.

“I would rather live a life of oh wells than what ifs.” – Kezia Noble

1. The Nice Guy is Not the Good Guy

Lots of guys mistake the nice guy for the good guy.

But in reality, these two archetypes have nothing in common.

The nice guy is needy, he panders, he lies and deceives to achieve his goal (typically some sort of sexual conquest).

He is willing to do whatever a woman requests in order to get laid.

He has no power, no backbone, and no balls!

The good guy on the other hand, is a different animal entirely.

He embodies that “I don’t give a fuck” attitude that is so common with the “bad guy” but he does it in a different way.

The good guy is his own man, he has his values, his goals, and his standards, and if a woman doesn’t live up to them, he has no problem leaving her at the drop of a hat.

Women sense this and see it as challenge.

They are constantly trying to be better to make sure that they are enough for their man.

And whereas women want to “fix” the bad guy, women who are dating the good guy aren’t trying to fix him.

They are trying to be their best selves for him.

The problem with the nice guy is that he is neutral, plain Jane, and vanilla.

With the good guy, women will see a tender and loving man with high morals and value who will occasionally show a darker and more primal side.

With the bad guy, women see a man who is primal and dark who will occasionally show a higher version of himself with some sort of random selfless act or kind gesture.

This keeps them believing that they can fix him and be the girl that changes him.

But with the nice guy?

Women get none of this.

They just get a guy who is emotionally disengaging and bland.

He doesn’t present any polarity or challenge because he is neutral.

He isn’t good or bad, he’s just kinda there.

What you need to realize is that the reason that the nice guy doesn’t work and the good/bad guy does is that women want a challenge.

Like we have already talked about, when a woman is with a bad guy, they embrace the challenge of changing him.

And when they are with a good guy, they are faced with the challenge of changing themselves.

But the nice guy presents no challenge.

He wants the woman and is willing to sacrifice everything he has to get her.

Kind of like your little cousin who won’t leave you alone at family dinners.

If you want to truly become great at seducing women, then you need to first become a man who is a challenge.

The first step to mastering seduction is mastering your inner game.

You need to take a holistic approach to your success on an internal level.

Focus on developing confidence by overcoming your fears.

Focus on growing your skillset and attractiveness by trying and mastering new things.

Focus on being comfortable with yourself and loving yourself so that you can truly show up as the man that a woman wants to be with.

Because until you fix your inner game, your outer game will never be sustainable.

5. Knock Women off the Pedestal

Guys, women are not magical creatures that deserve your undying love and affection just for existing.

They are just people like you and me who have their own flaws and their own shit.

If you want to succeed with women then get them off the pedestal.

Realize that they don’t aren’t perfect.

Hell… some of them are downright annoying!

As soon as you stop seeing women as this prize to be won and start seeing them as equals and peers who have their own problems and struggles just like you, you can truly start to connect with them and create massive attraction.

The Godfather by Mario Puzo