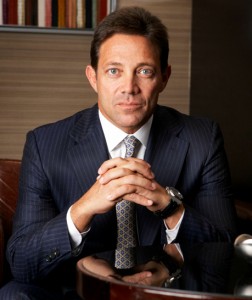 In the ’90s, Jordan Belfort built one of the most dynamic and successful sales organizations in Wall Street history. During that time, he soared to the highest financial heights, earning over $50 million a year, a feat that coined him the name “The Wolf of Wall Street.”

As the owner of Stratton Oakmont, Belfort employed over 1,000 stock brokers and raised over $1.5 billion and started more than 30 million-dollar-companies from scratch.

He’s acted as a consultant to more than fifty public companies, and has been written about in virtually every major newspaper and magazine in the world, including The New York Times, The Wall Street Journal, The Los Angeles Times, The London Times, The Herald Tribune, Le Monde, Corriere Della Serra, Forbes, Business Week, Paris Match and Rolling Stone.

Along the way, he succumbed to some of the traps of the high-flying Wall Street lifestyle, going through a spectacular—and well-publicized—fall from grace. Taking invaluable lessons from the mistakes he made and the prices he paid, he has re-emerged as a globally recognized potent force behind extraordinary business success.

Jordan’s two international bestselling memoirs, The Wolf of Wall Street and Catching the Wolf of Wall Street, have been published in over forty countries and translated into eighteen languages. His life story has been turned into an Oscar-nominated, major motion picture starring Leonardo DiCaprio and directed by Martin Scorsese.

“Success in the absence of ethics and integrity is not success at all.” – Jordan Belfort

“We are not the mistakes of our past, we are the resources and capabilities we glean from our past.” – Jordan Belfort

1. Do Not Let Your Past Determine Your Future

We all make mistakes.

We all have regrets.

We all wish that we could turn back the clock and change that one thing.

The past is the past and there is no way to change it.

For Jordan, his past was filled with excess, unethical business practices, and copious amounts of drugs.

But he didn’t allow that past to define him.

After going to jail, Jordan bounced back, regained his integrity, and moved on with his life.

He didn’t wallow in self-pity or worry about things that couldn’t be changed.

He put his focus on the future and got to work.

And if you want to succeed in your business, relationships, health, and in life, you must do the same thing.

Don’t let the mistakes of your past determine your future.

You are not your past.

And in an instant, you have the power to make a decision and change everything.

During the ’90s, Jordan became wildly successful selling penny stocks to the top 1%.

While he started his company with good intentions and ethical standards, he quickly succumbed to the temptation of easy cash and illegal deals.

And even though he was making upwards of $50 million a year, his success was not sustainable because it was not grounded in integrity and service.

Eventually, Jordan’s indiscretions caught up with him, resulting in massive personal and financial losses and nearly 2 years in prison.

Upon his release, however, Jordan committed himself to creating businesses that helped others and genuinely provided value to the marketplace.

Now, more than a decade and a half later, Jordan has completely transformed himself and his businesses and is changing the way that companies all over the world think about sales and business.

If you want to be successful over the long term, then you have to have an unshakable foundation in honor and integrity.

You might be able to make a few dollars (or even a few million) by following unethical practices, but it will always catch up with you sooner or later.

One of the quickest ways to fall prey to bad decisions and unethical practices is by doing too much too soon.

When Jordan started to grow and expand his company at an unsustainable rate, it caused him to start taking fast cash and illegal deals.

Everyone wants to grow their businesses and their wealth, but when you lack patience, you can quickly succumb to unscrupulous practices and easy money.

On your journey of personal development and massive financial success, commit yourself to the long game.

Do not be too eager to grow things too quickly.

Have patience and be willing to choose long-term, sustainable growth.

If you want to make your first million dollars, then the solution is simple.

Money and success come to those who are willing to serve others and put people before profits.

If you want to build true wealth and have a life of financial abundance and freedom, the first step is to find a way that you can selflessly serve the world and offer real value to people who need it.

5. Sometimes Rock Bottom is the Best Thing That Can Happen

During the interview, Jordan revealed that getting indicted and sent to prison was the best thing that ever happened to him.

While he admitted that it was painful while he was going through it, he said that hitting rock bottom allowed him to reevaluate his life and career choices and recreate himself as the business owner and coach that we all know and respect today.

You are going to hit rock bottom at some point in your life (if you haven’t already).

And when this happens, you should get excited.

Sometimes, losing everything and starting over with a clean slate is the best thing that can happen to you.

As long as you learn from your mistakes and move forward with enthusiasm and purpose, rock bottom isn’t necessarily a bad place to be.

The Bonfire of Vanities by Tom Wolfe

Fear and Loathing in Las Vegas by Hunter S Thompson

The Wolf of Wall Street by Jordan Belfort