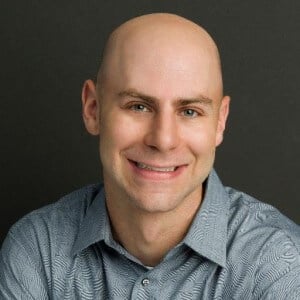 Adam Grant has been recognized as Wharton’s top-rated teacher for five straight years, and as one of the world’s 25 most influential management thinkers and Fortune’s 40 under 40. As an organizational psychologist, he studies how we can find motivation and meaning, and lead more generous and creative lives.

Adam is the author of two New York Times bestselling books translated into 35 languages. Originals and Give and Take.

Adam received a standing ovation for his 2016 TED talk on the surprising habits of original thinkers and was voted the audience’s favorite speaker at The Nantucket Project on the success of givers and takers, which was the subject of his most recent TED talk. His speaking and consulting clients include Facebook, Google, the NBA, Merck, Goldman Sachs, Disney Pixar, Johnson & Johnson, BCG, Amex, the U.S. Army, and Navy, and the World Economic Forum, where he has been honored as a Young Global Leader.

“The best way to succeed is to help other people succeed.”

One of the secret weapons of high performers, their proverbial “special sauce” if you will, is the five-minute favor.

These favors are simple, easy-to-do tasks that can have a huge impact on your network and future success.

One of the simplest examples is devoting 10 minutes a week to connecting at least 2 people you feel need to know each other.

This simple tactic resulted in the formation of the Beatles and Apple.

Another example is taking extra initiative at work or in the classroom.

Simple things like providing your boss with ten easy-to-implement actions to save the office money or helping a co-worker with a project that they are behind on can drastically increase your social capital and build reciprocal kindness and goodwill.

2. Being an “Original” Is Simple

If you want to be original, the path is simple.

Second, look for a new way to do things.

And third come up with a superfluous number of ideas, even bad ideas, until you find the solution for which you’re looking.

Many people seem to think that being an “Original” is a complicated process that requires psychedelic drugs, a MENSA IQ, or a real creative genius.

But the simple truth is that all non-conformists, originals, and real industry disrupters have followed the same three steps.

3. Learn to Reframe the Mundane

One of the most immediate and impactful ways that you can increase your own levels of happiness and satisfaction is to reframe the mundane tasks in your life and find a way to enjoy them.

The simplest example is email.

How many of you spend at least an hour a day sorting through, organizing, and responding to emails?

How many of you think that one hour sucks?

It might seem hard to reframe this seemingly sucky task into something that is genuinely meaningful and enjoyable, but just imagine if you could.

Imagine if instead of seeing your email as drudgery, a  life-sucking task, you saw it as an opportunity.

An opportunity to touch every life with which you connect.

An opportunity to inspire love, gratitude, and empowerment in every interaction.

Because isn’t that exactly what it is?

It’s a chance for you to connect with people from all around the globe and inspire them with your attitude, your mindset, and your values.

When you approach it from this angle and with this mindset, checking your email because an empowering and exciting task because, instead of thinking “How many freaking message do I have to handle” you get to think “How many lives will I get to shape?”

4. Being an “Original” Is About Execution Not Ideation

Being an original has nothing to do with the idea.

Everyone, if they think about it long enough, can develop a “Billion dollar idea” that would change the world and disrupt entire industries.

But they never take the requisite action.

They allow their dreams, their hopes, and their ideas to wither away and die because they cannot bring themselves to execute.

They take their ideas with them to the graveyard because they were unwilling to take action on those ideas!

At the end of the day, those who truly succeed and shape the world are those who are willing to take ideas and run with them.

To take massive action in the face of uncertainty, and give their idea the chance to see the light of day.

5. Fear the Failure to Try

Many gurus and self-help proponents shame the fear of failure.

They instill a toxic belief that fearing failure is a bad thing.

But the simple truth is that you should fear failure.

In fact, it should scare the hell out of you!

But not in the way that most people imagine.

You shouldn’t fear the failure of your business, your relationship, or your bank account… you should fear your own failure to try.

At the end of the day, when you lie in your bed, weathered by time, and near the end, you will not look back in regret on the things that you tried and failed.

You will look back with regret on the times that you failed to try.

You will wonder “What if” I had asked her to marry me?

You will wonder “What if” I had started that business?

You will wonder “What if” I had embraced my truth and lived a life that was in alignment with my values and my beliefs instead of allowing my family and society to dictate my actions.

Because at the end of the day, we are all dead men.

The worst thing that can happen to you, death, is already a certainty.

So don’t fear failing to succeed.

3. Moonwalking with Einstein by Joshua Foer