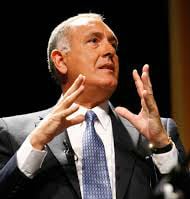 For 25 years, Joe Navarro worked as an FBI special agent in the area of counterintelligence and behavioral assessment. Today he is one of the world’s leading experts on nonverbal communications and lectures and consults with major corporations worldwide. He is an adjunct professor at Saint Leo University and frequently lectures at the Harvard Business School.

He has appeared on major U.S. and International media outlets including CNN International, Fox News, BBC, The Times (UK), Crossfire with Chris Matthews, CBS, NBC, NPR Radio, The Washington Post, and The Times (UK), on topics as varied as body language and management practices.

“We are more powerful, more knowledgeable, better prepared than we think we ever are.” – Joe Navarro

1. Understand that Non-Verbal Communication is Contextual

While it has been said that nearly 80% of communication is nonverbal, this is only true in context.

While that percentage will rarely drop below 50%, nonverbal communication is contextual.

For example, a couple sitting at a restaurant staring into each other’s eyes and saying nothing are communicating 100% nonverbally.

But a president giving a State of the Union Address is only communicating 60% nonverbally.

2. A Few Hacks to Establish Trust

Whenever you meet someone for the first time, you can use a few hacks to quickly establish trust and been seen as a more likable and trustworthy person.

First of all, you want to smile.

But you want to delay your smile just a few seconds after you shake someone’s hand.

If you come out grinning from ear to ear like the Cheshire Cat, subconsciously the other person will wonder if you are trying to manipulate them or hide something.

By delaying your smile only a few seconds, it will be seen as more authentic and genuine.

In addition to this hack, I want you to go into your wardrobe and immediately throw out any three button suits that you own.

And finally, to instantly establish trust and connection, learn how to effectively leverage friendly touch.

Typically, you want to tap someone on the arm or shoulder to emphasize a point during a conversation.

This physical touch releases a small dose of oxytocin into the brain creating a deeper connection and sense of security.

3. How to Speed Read Discomfort

If you want to know whether or not someone is feeling uncomfortable, there are a few surefire, and often uncontrollable, physical signs that they will show during the interaction.

The first is that they will often compress their lips and furl their forehead.

If you notice that their lips are pressed firmly together, their jaw is clenched, or their forehead is scrunched, then that person is likely uncomfortable for some reason.

In addition to these giveaways, people will often involuntarily touch their neck, wring their hands, or clench their fists.

If you notice any of these things happening during a conversation, then you can typically assume that something has made the other person uncomfortable.

An important caveat here is that even though a person might display signs of discomfort, you don’t necessarily know why they are uncomfortable.

During an interrogation, Joe mistakenly assumed that the woman he was questioning was uncomfortable because she was guilty.

In actuality, she was uncomfortable because she hadn’t put enough change in the parking meter.

4. How to Speed Read Comfort

If you want to quickly determine whether or not someone is comfortable with you, then there are a few simple signs to look for.

The first sign of comfort, and the only signal that is entirely involuntary, is the dilation of the pupils.

While people can take conscious control of their other physical faculties, they cannot control the dilation of their pupils, making it a dead give away when speed reading someone’s comfort or discomfort.

In addition to pupil dilation, people who are comfortable and relaxed will typically display a marked lack of facial tension, an arching of the eyebrows, raised arms, and increased space between their fingers.

And now the big one.

How to speed read a liar.

Unfortunately, however, there are no axiomatic tendencies or actions that give away whether or not someone is lying.

While people will typically display signs of discomfort whenever they are giving misinformation or intentionally deceiving someone, there are no guarantees.

So while you can apply the tactics detailed in this interview to make an educated guess about when someone is lying, there are no guarantees, so do not base your assumptions on a small twitch or nervous stutter.

The Histories by Herodotus

The Descent of Man by Charles Darwin

The Naked Ape by Desmond Morris

What Everybody is Saying