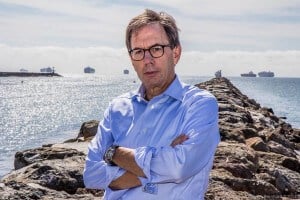 Dr. Mark Goulston has been described as a “people hacker.”Starting off as a clinical interventional psychiatrist and UCLA professor of psychiatry, he learned to “hack” into the minds of suicidal and potentially violent individuals to prevent acts of destruction to others or themselves.

He next went on to train FBI and police hostage negotiators. He has since expanded his work to “Hacking Genius” and speaks and provides webinars internationally on: “Thinking Like Steve Jobs – How to Create ‘Gotta Have It.'”His company, The Goulston Group, is hired by Founders, CEO’s and Boards of Directors to help them create a “gotta have it!” response to their services and products (which seamlessly translates into “gonna buy/hire it,” a “gotta work there” response in outside talent they’re recruiting, a “gonna get it done” response from employees and a “gotta invest there” response in investors.

He contributes to the Harvard Business Review, Huffington Post, Fast Company, Business Insider and writes the “Closing Bell” for C-Suite Quarterly Magazine. Frequently called upon to share his expertise with the media, he has been quoted in the Wall Street Journal, Harvard Business Review, Fortune, Newsweek, Time, and Reuters; has offered commentary on NPR, CNN, and Fox News; and has appeared on the Oprah and Today shows. He lives in Los Angeles, California.

Dr. Goulston is also the author of Just Listen and several other best sellers.

“Be a first class noticer”~Warren Bennis

1.  Learn to Notice & Listen into People

One of the most important skill anyone can develop is listening, not just listening however, listening into people. Listening into someone means learning to read between the lines and past the ambiguity to get to the bigger picture.

What is really going on in their lives? What are they really saying?

Listening into someone requires that you “listen” to their body language, their facial expressions, their tone of voice, and any other nonverbal signals. Listen to more than just the words, listen to them. Feel for them, put yourself in their shoes.

2. Deepen the Conversation to Get to the Root

In any relationship that you are in, the best way to diffuse a fight is to get to the root, to deepen the conversation and understand what is really going on and to approach it from their side.

“I know that I have been really busy at work recently, and I bet that it has put a lot of stress on you, especially since I haven’t had as much time for you or the kids and haven’t been helping out like I normally do. I understand it’s not fair to y’all and I’ll make it a priority to do more moving forward.”

What the man is doing in this example is cutting to the root of the problem by listening into the conversation and then diving deeper. He doesn’t leave it at the surface level of how he’s not taking out the trash, he dives deeper and brings up his work schedule and how he hasn’t prioritized family.

The interesting thing is, this conversation will likely end with his wife apologizing! Whenever you let your guard down, whenever you are honest and open yourself up and are no longer on the defensive or offensive, but are on the other person’s side, your whole world changes.

3. Learn to be Tender

One of the hardest things for a man, especially someone who is much more “alpha” than the normal guy, to do is to learn to be tender. It’s learning just to feel for someone without having to fix them or change them. It’s learning to be present and give them your full attention and to cry with them, laugh with them, smile with them, or simply be with them.

Being tender is not easy, but it will transform your intimate relationships quicker than anything else. Put aside the macho facade every once in a while and just be tender.