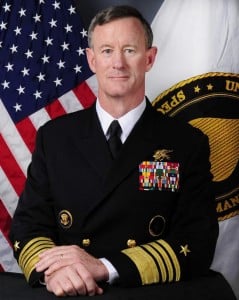 William H. McRaven is a former United States Navy admiral who last served as the ninth commander of the United States Special Operations Command from August 8, 2011, to August 28, 2014. Since January 2015, he has served as the chancellor of The University of Texas System.

Admiral McRaven retired from the Navy on August 28, 2014, after more than 37 years of service.

If by Rudyard Kipling

1. Focus on Doing Your Duties Now

Success in life doesn’t come from focusing on what you are going to do in the future.

It comes from focusing all of your attention on the tasks that are in front of you right now.

Yes, you should have goals, dreams, and aspirations.

However, do not allow these dreams and aspirations to rule the present moment.

The quickest way to achieve success (whatever your definition of success might be) is to have a plan and then execute on that plan, day in and day out.

Do your duties now and allow tomorrow to take care of itself.

Until one day, they are struck by the very harsh reality that they are not.

No man, regardless of size, intelligence or other capability has ever “made it” on this planet by themselves.

We were designed for community and teamwork.

One of the fastest ways to achieve your mission, whether that is in business, in your health, or in your relationships is to surround yourself with amazing, like-minded individuals who can help support you and push you along the journey.

With a tight-knit circle of influence, you will be able to accelerate your results, find your blind spots, and receive help when you are outside of your comfort zone.

And more than that, you will have more fun!

Life is a team sport, it’s meant to be played with other people.

So eradicate the erroneous notion that real men do it alone.

Build your tribe and have a blast doing it.

3. What Are You Really Made of?

So often in our modern society, we are quick to judge others (and ourselves) on external factors like height, weight, attractiveness, financial success, and social capital.

But we forget that our worth is defined by how much heart we have, not how much money or muscle we have.

A person’s worth is defined by what’s inside.

Admiral McRaven illustrates this point perfectly in his book when he shares the story of Thomas Norris, a Navy Seal who was awarded the congressional medal of honor.

During training, nearly all of his classmates assumed that Tom would fail.

He was short, skinny, and out of shape compared to the other men.

However, Tom had a level of internal fortitude, mental strength, and heart that few men in the world display.

And his bravery was exemplified repeatedly on the battlefield, especially during the infamous rescue mission that lead to his Congressional Medal of Honor.

Like Tom, many of you might not be what comes to mind physically when people think of an “Alpha” or a “Real Man”.

But that isn’t what matters.

What are you made of?

What is your character like when everything goes wrong and your life is spiraling out of control?

That is what determines your worth as a man.

4. You Are Going to Fail

You are going to fail.

I don’t care how good you are, how smart you are, or how strong you are.

Life will kick you to the curb and beat you senseless at some point in your existence.

This isn’t a speculation.

You are going to fail!

You might not face the catastrophic failures that come to mind when you hear the word, but at some point in your life, you will be faced with a situation, a business deal, a relationship, or a physical challenge that you simply cannot surmount.

So get over it.

Stop letting this fear of failure rule you and accept that failure is inevitable.

So get used to failing.

If you do anything of worth in this life, it is going to become a pretty common occurrence.

Many men operate under the flawed ideology that the more 0’s they have in their bank accounts, the more successful they are.

Yes, money is important, and you should certainly strive to earn enough to enjoy your life, be comfortable, and have enough left over to share.

But it is not the end all be all to success.

These are the things that determine a man’s success.

If you are surrounded by good friends, have a happy, loving relationship with your wife, are in good health, and positively impact the world on a regular basis, then congratulations… You have achieved success.