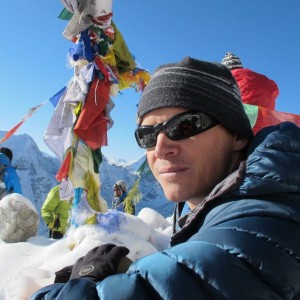 Brian has always had an itch for adventure. He served in the U.S. Navy as an Air Rescue Swimmer, he has summited 6 of the 7 major peaks in the world including Mount Everest, which, after a solo ascent, he was forced to descend blind due to faulty goggles causing snow blindness. Brian wrote the book “Blind Descent” based off of the events and lessons learned from his time at Everest and is currently training to summit the last of the seven peaks

“Get busy living or get busy dying” – Shawshank Redemption

Life is full of sayers. People who say they will lose weight, say they will start saving more than they spend or say they will start that business they have been talking about for years. But they never follow through. They are relegated to lives of menial existences, filled with mediocre intentions and non existent actions.

As men (especially younger men) we are often prone to haste, because quite frankly, waiting sucks. As guys, if we’re going to do something, we don’t want to wait, we don’t want to weigh different courses of action and examine the possible consequences. And this is when we get into trouble.

This is how businesses fail, how sexual mistakes are made, and how dreams are broken. We must learn to pause before taking action and evaluate. Ask ourselves what the consequences of our actions will be and determine the best possible way to proceed.

Often just as easy as not thinking at all is over-thinking situations to the point of insanity. If we go out and get a cute girl’s number, we will sit for hours trying to think of the perfect line to text her, stewing over every single word instead of sending a simple “hey.” We often obsess over minutiae instead of focusing on the big picture.

As Einstein once said “Make things simpler, but not simpler than they need to be.” Don’t over-analyze, pause, take stock and execute.

4. Take Life One Step at a Time

As men who are driven and ambitious, it is easy to live in the future, focusing on steps that are light years away. We think about the color of the flowers we will have at our wedding, before we even say hello to the girl. We think about how we will invest our income from our next venture, before we even know what that venture will be.

We think about pretty much anything, except the thing right in front of us. Like Brian did while descending Everest blind, we need to slow down and take things one step at a time. Face each challenge as it presents itself and worry about tomorrow, tomorrow.